Hello, this is Gregor again. I'm writing from Tartu. I havn't written about the performances I witnessed yesterday. So here's my account.


As I wrote yesterday, my evening started with a performance for one spectator. Apparently it's a popular format these days (and rightly so). For example every year there's a young artists art auction in Tartu. Young artist come with their beloved paintings, engravings and vases and try to persuade politicians and businessmen to buy their work. This year the work which was sold for the highest price was a performance performed only once for the buyer.

I guess we all enjoy a personal touch. Your own personal Jesus, isn't it?


What followed was "The Love Piece". 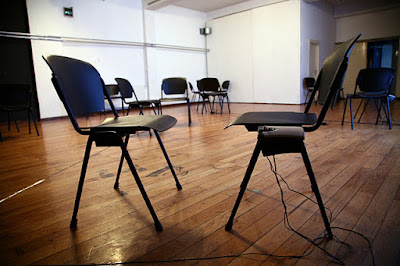 I won't give You any spoiler warnings as there won't be any spoilers since
You can't spoil a child through love.
I just turned twenty five. That's not a long time (my aim is not to die before I'm 114 years old, which then just happens to be the year 2100), but it's still something. A whole quarter of a century. Looking backwards I would only need 80 of my own lives to go and shake Jesus's hand. Now why would I want to do that if I have 14 billion other hands to shake in this very life? And add another 14 billion eyes to be amazed by.

We sat opposite each other and while laying my blinded eyes on my brown-eyed blind date's forgiving eyes with one eye on my diary (for which I'm sorry as it wasn't a pretty sight) she opened my eyes as I realised that after 25 years of casting my eyes down, these were the first two third four fifth six seventh eight nine tenth eyes I've given unprecedented attention for one single half an hour.

What a relief, at least this day came and there will be more.

In one of Ywan Goll's novels there appears a downhearted man who walks for years desperately around Paris looking for that somebody who would burst into tears while turning her eyes to his. I read this book at highschool and felt immensely inspired. I must have thought something like I have to seek for those eyes as well! Or maybe it was more like I knew it! I knew it! That's what I've been feeling for a long time, but I didn't know how to put it!


No matter what I felt these were genuine and needful thoughts for a 16 year old romantic. 10 years later, without any real needs for overpowering tears, these eyes found me. Not that she cried. No way. It wasn't about tears.

"The Love Piece" is a very loving piece indeed. Pure magic, established several millions of years ago.
Posted by Nu Performance Festival at 12:11 AM