Greetings to You from the very centre of Tallinn, from the 9th floor of Hotel Viru where a decent double bedroom looks above the skyline of the Old Town.


My name is Gregor and I was asked to keep up this blog during the NU Performance Festival. For the hard work of writing about performances five days in a row I was awarded with a privilege of inhabiting one of the bedrooms in here. This hotel has 20 something floors, 30 rooms on every floor. Possibly a thousand people around me. Some 100 of them being either the organisers, guests or performers of this festival. Festival's bunch has taken over the 9th floor. It's great. Everyone knows that it's essential for a festival to have a strong core.


So - Hotel Viru is the host and we are all guests. You are guest as well. And we are all invited. All the performances of this festival will take place inside the hotel, whether in the lobby, in an elevator, in somebody's room or up on the roof. And the theme - you might have guessed - is hospitality.


There are some performances I'm particularly looking forward to. One is said to be for an audience of exactly one person. The thought of it itself is inspiring. I will let You know how about it.


But before we start with the festival, let me tell You a few things about the building in question. If You are not interested in history scroll down.


This hotel was built in 1972. Before that this spot was more or less empty. It was a square next to the Old Town.


Before the II World War somewhere here stood a house in which the painting collection of Estonian Art Museum were kept. This house caught fire during war and much of the paintings were destroyed. Right now we are having a party above the ashes of these paintings. It's great. Perhaps it's poetical.


Hotel Viru was the first high-rise modernist block in the centre of Tallinn. Tallinners say that it ruined the view from the sea and it accelerated the planting of other blocks in the centre.


Hotel Viru was built for Finnish tourists. Soviet Tallinn needed a (boastfully) welcoming landmark. Perhaps the commies wanted a good kick towards the balls of the medieval town centre. It was all about progress and a million other things.


Hotel Viru was built out of microconcrete. Microphones and concrete. KGB needed to know what the foreigners were up to. On top floor there was a secret KGB room, which is nowadays a museum.


But even with KGB in the house it didn't stop Viru becoming one of the most notorious places in Soviet Tallinn. A lot of the people who came here from the West brought all the possible things (which were prohibited or sold out etc) to sell in the black market. Hence Viru was a destination for local fortune seekers, trying to make huge money with stuff bought from tourists.


Another thing was the nightlife in Viru of which I unfortunately don't know much. Cabaret, disco dancing, prostitutes (allegedly a reason for thousand of family dramas in Finland), drugs etc. One can still clearly feel those vibrations still in this building.


And after the collapse of the Soviet Union? Most of Estonians would think that the place looks and feels like a ferry which goes between Tallinn and Helsinki. They don't get it wrong. As I walk along the floors I feel that the building floats. I'm not the only one. Fridge is my room sounds like an engine from a ferry.

So I was happy enough to find out that the festival got a flying start with a karaoke show tonight.

At first all the guests were invited to the ground floor lobby, where a big band from Põlva (a small town in Southern Estonia) welcomed us with some jolly music and we all marched to the second floor restaurant where the band members found their places on the stage and the audience were made to sit down, drink and have fun.

What followed was a magical karaoke concert. The band with some 20 musicians was passionately loud (in a good way) and had such a cool sound that it was impossible to fail with even the worst kind of singing. 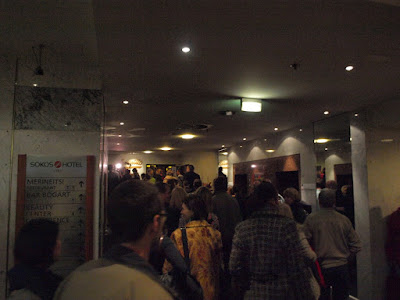 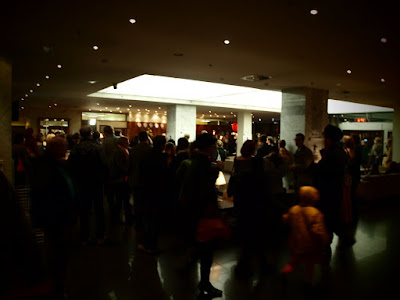 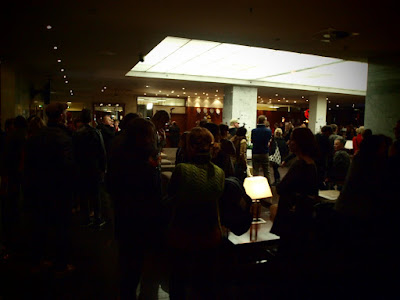 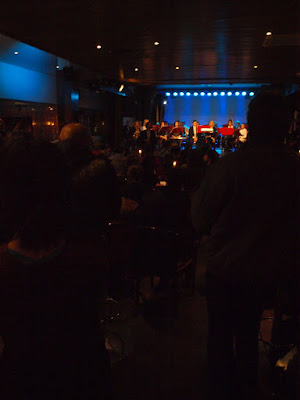 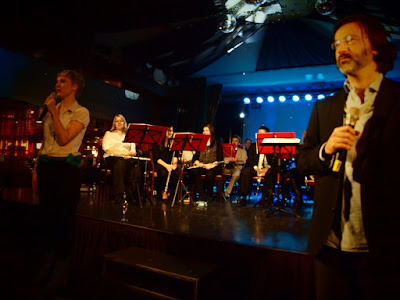 Hosts of the evening: Maike Lond and Peter Stamer 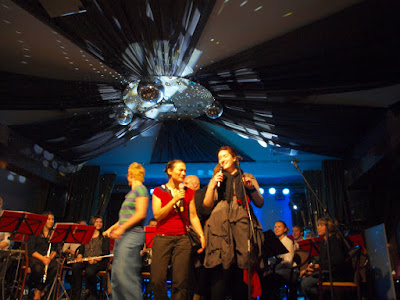 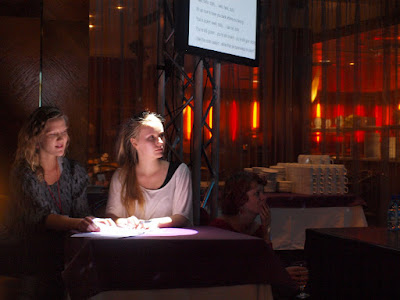 Note how the "karaoke machine" was constructed. This table was filmed from above and projected on screens for singers and the audience.  Girls had the lyrics printed put and throughout the songs they pointed at the right words with a help of a pen. And if they felt that some words had to be emphasized they made it clear on paper. 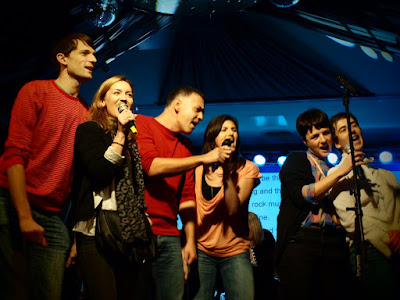 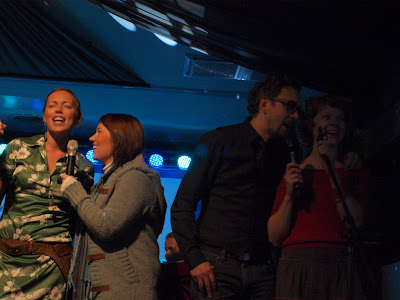 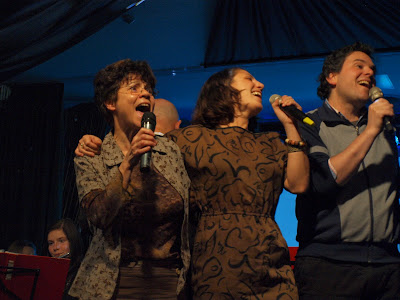 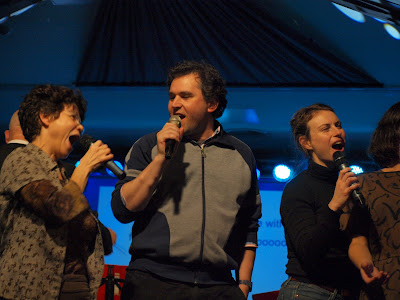 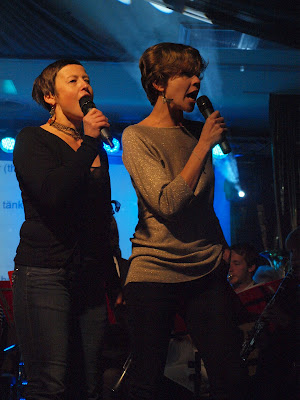 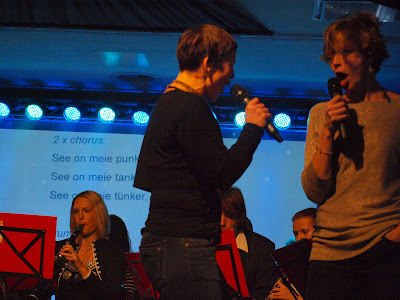 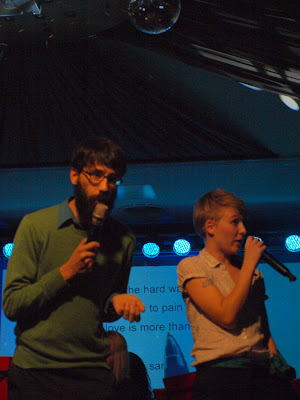 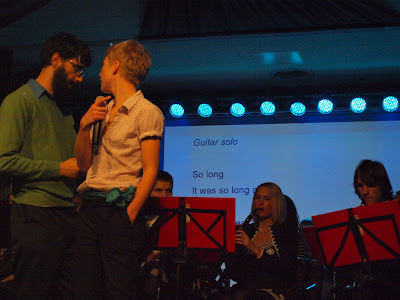 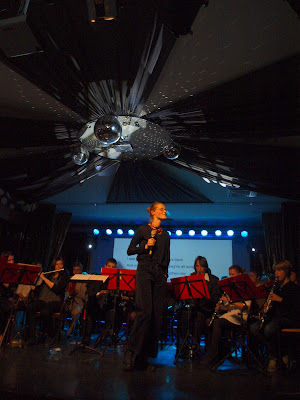 I have to say that it was a brilliant idea to start the festival with karaoke. For one thing it shows that the festival doesn't lack self-irony.
And then of course it was hugely enjoyable to see people frankly hopping on to the stage and singing their hearts out. It made people very happy. During the last song, Queen's Bohemian Rhapsody, the overall feeling was thrilling. I was greatly impressed. An excellent performance by a collective author called The Guests.
Posted by Nu Performance Festival at 3:16 AM